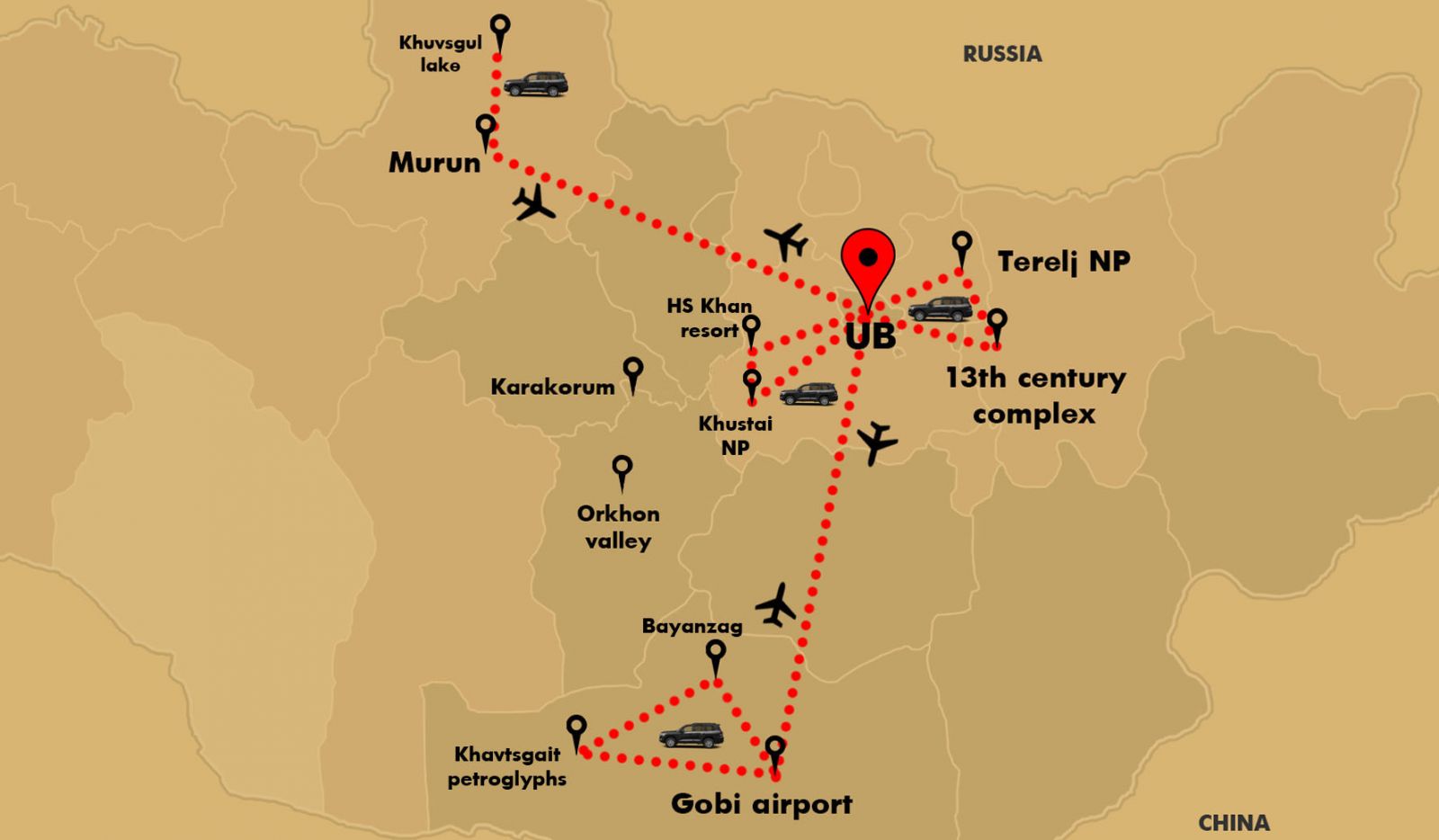 After breakfast you will see naadam's opening ceremony.

Naadam  is held in during from July 11–13 annual, in the National Sports Stadium. Naadam begins with an elaborate introduction ceremony, featuring dancers, athletes, horse riders, and musicians. After the ceremony, the competitions begin. The competitions are mainly horseback riding. Naadam is the most widely watched festival among Mongols, and is believed to have existed for centuries in one fashion or another. Naadam has its origin in the activities, such as military parades and sporting competitions such as archery, horse riding and wrestling, that followed the celebration of various occasions, including weddings or spiritual gatherings. It later served as a way to train soldiers for battle. Now it formally commemorates the 1921 Revolution when Mongolia declared itself a free country. Naadam also celebrates the achievement of the new state. Naadam was celebrated as a Buddhist/shaman holiday until secularization in the 1930s. The three sports are called "Eriin 3 naadam" which is called three games of man in English. Genghis Khan's nine horse tails, representing the nine tribes of the Mongols, are still ceremonially transported from Sukhbaatar Square to the Stadium to open the Naadam festivities.

Day 4 (July 12): This morning we drive to Khui doloon khudag and see horse race. Then we will short explore Khustai national park.

The Mongolian Government declared Hustai National Park as a Specially Protected Area in 1993, one year after the initiation of the reintroduction project of the Takhi (Przewalski's horse) to the Hustain Nuruu. The HNP extends through the Khentii Mountains and includes the western edge of the Mongolian steppe at the boundaries of Altanbulag, Argalant and Bayankhangai Soums of Töv Province. The park is about 100 km from the capital city of Ulaanbaatar to the west.

Day 5 (July 13): Today we will fly to the Gobi and drive to great Yol Valley. (Flight will take an hour)

Bayan zag
Bayanzag, which means ‘rich in saxaul shrubs’, is more commonly known as the ‘Flaming Cliffs’, a name penned by the paleontologist  Roy Chapman Andrews. First excavated in 1922, it is best-known worldwide for the number of dinosaur bones and eggs found in the area, which you can see in museums around the world. Even if you are not a ‘dienophile’, the beauty of the surrounding landscape is a good reason to visit. It’s a classic desert of rock, red sands, scrub, sun and awesome emptiness. Bayanzag is around 90km from Dalanzadgad.

Day 7 (July 15):  After breakfast at the Ger camp  we drive to Khavtsgait rock art

Day 8 (July 16): Today we will fly back to Ulaanbaatar. Then drive to Terelj and 13th Century complex.

Aryabal meditation temple was built in 1810-s by Mongolian and Tibetan artists in Terelj National Park. In many cases Buddhist monks from Manzushir monastery came to this temple to do meditation. The temple style is more Tibetan styled like white square shaoed and white colored main building and porcelain roofs decorated with Buddhist and religious signs. In 1937-1939 Mongolian communists came to this temple and destroyed it completely and killed some monks from this temple. Later in 2000 Buddhist monks of Lamiran temple in Ulaanbaatar initiated the project to restore this temple and completed the restoration work in 2004-2007. Lamiran temple monks sometimes come to this temple and cater religious service here and in many days of year it is open place for visitors and tourists, who want to thank for the god and do meditation.

The set of 108 stone stairs will lead you to the main temple and 108 small stupas and 108 prayer wheels were placed around the temple. Moreover, signs with 144 Buddhist teachings, written in English and Mongolian, lined the sides of the path.

Day 11(July 19): Journey to Khovsgol Lake
We go on our interesting trip to the Blue Pearl Khovsgol lake. Today you will do visit to Tsaatan family and take a quite walk along the mother sea shore.

Khovsgol Nuur/Lake Khovsgol/.
Khovsgol Nuur is located 101km from Murun province. The Khovsgol lake is amazing pure lake which stretches 136km deep into the Siberian taiga and the deepest lake in Mongolia as well as the world's 14th largest source of fresh water. Altitude is 1645m above sea level . The lake has 2760 square km, 133.4km long, 262m deep. Historicaly the stunning lake was formed 7 million years ago.

Having stayed overnight at the lake, we will fly back to Ulaanbaatar leaving blue pearl. All you have to do is to sit back, relax and enjoy your journee.  This day is for return to homeland and shopping for cashmere and souvenirs.

We will take you to the airport. Check your items when you're leaving the hotel. Good luck for your next trip.