Through where: Southern, Central
Ideal time: May- September
Price: By request 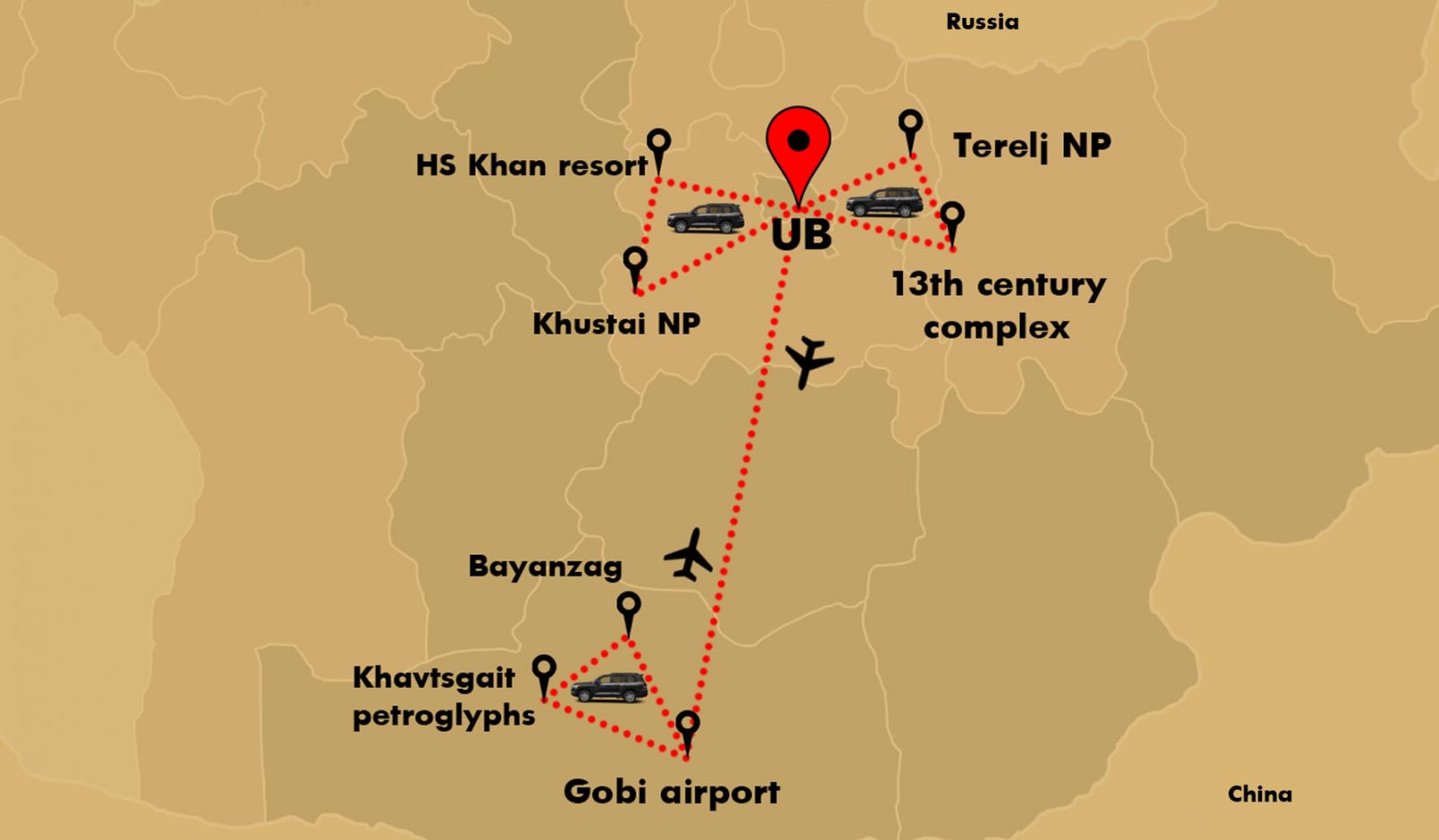 Early in the morning we will fly to the Dalanzadgad and drive to Yol valley. Flight will take an hour

Day 4: This morning we head to Bayan zag /Flaming Cliffs/

Bayan zag
Bayanzag, which means ‘rich in saxaul shrubs’, is more commonly known as the ‘Flaming Cliffs’, a name penned by the paleontologist  Roy Chapman Andrews. First excavated in 1922, it is best-known worldwide for the number of dinosaur bones and eggs found in the area, which you can see in museums around the world. Even if you are not a ‘dienophile’, the beauty of the surrounding landscape is a good reason to visit. It’s a classic desert of rock, red sands, scrub, sun and awesome emptiness. Bayanzag is around 90km from Dalanzadgad. Stay overnight may in the tent if the weather is fine

Day 5: After breakfast at the Ger camp  we drive to Khavtsgait rock art

Day 6: Today we will fly to Ulaanbaatar. Then drive to Terelj and 13th Century complex.

Day 7: This morning we head to Khustai National park
The Mongolian Government declared Hustai National Park as a Specially Protected Area in 1993, one year after the initiation of the reintroduction project of the Takhi (Przewalski's horse) to the Hustain Nuruu. The HNP extends through the Khentii Mountains and includes the western edge of the Mongolian steppe at the boundaries of Altanbulag, Argalant and Bayankhangai Soums of Töv Province. The park is about 100 km from the capital city of Ulaanbaatar to the west.

Day 8: Back to Ulaanbaatar

Having stayed overnight at the luxury resort , we will  back to Ulaanbaatar. All you have to do is to sit back, relax and enjoy your journee.  This day is for return to homeland and shopping for cashmere and souvenirs.

We will take you to the airport. Check your items when you're leaving the hotel. Good luck for your next trip.

Mongolia was my dream and it became a reality during last summer, I came back amazed by the beauty of the landscapes, by unexpected encounters the kindness and hospitality of the Mongols who without knowing us, invited in their yurt to offer us some delicious salty tea or a party - and it was thanks to our guide, professionalism, sense of discovery and resourcefulness that we had a great time and have benefited from every moment. Our guide Bayaraa had planned everything: local and delicious food, accommodation with nomads or bivouac in landscapes of breathtaking beauty and all in good mood. I dream to go back because Mongolia is great and there is so much to discover. Long live Bayaraa and "Nomadic of Blue Sky" team.

I was delighted with the trip to Mongolia, which you organized for us; discovery of the west which is very interesting, and especially of various sites, lakes, villages where we were welcomed in the yurts, by cattle breeders, with a lot of warmth and kindness, approaching the snow-capped mountains, and glaciers !! an endearing nature, as evidenced by the beautiful photos I made, and those received from Sylvie. The beautiful show we saw, beautiful dances and costumes ..! and then all these small markets more attractive than each other, which allowed us to make pleasant purchases .. the day also shop which sealed the end of our trip, and allowed us to bring back beautiful cashmere sweaters ... I'm not referring to your kitchen which was very good, you had to camp the stove and set the table, for the hungry we were !! The essential, however, will remain your kindness, your availability, your competence, and your dynamism !! It was a total success!

We made a three-week trip in 4X4, in the far west of the country, we were 7 people. We can only rent Nomadic of Blue Sky services, both organizationally and materially. Always in a good mood, attentive and positive, always busy to solve small problems. I would add that he/Bayaraa/ was very good French. Thanks to him, there was a great atmosphere. He has great knowledge of him country both culturally and geographically.